For questions send us a message through the contact page form

For questions send us a message through the contact page form

A much-asked question is ‘is it safe to have a psilocybin experience while on antidepressant medication?’. Here we try to answer that question. Unfortunately, the answer is not a simple ‘yes’ or ‘no’. There are a lot of different antidepressants and they all have different mechanisms of operation. And of course, psilocybin itself has plays a crucial role.

So, let’s start with there.

How does psilocybin work and what are the possible risks?

Luckily, there is a sound body of research into the working mechanisms of psilocybin (and other psychedelic substances) ¹. Psilocybin shares with other psychedelics that they act as an agonist at the serotonin 2A receptor subtype (5-HT2AR). This means that psychedelics work via a very specific system in our brain, traceable to the molecular level. Even more remarkable is that when this receptor is blocked (by another agent), the psychedelic en profound experience do not occur!

While the psychedelic effect is of course the desired effect of psilocybin, there is more. There has been extensive research into the safety of psilocybin (and other psychedelics) ². The results are encouraging; psilocybin has a low toxicity and doesn’t lead to organ damage or neuropsychological deficits. During the experience there are some physiological symptoms that may occur, such as dizziness, weakness, tremors, nausea, drowsiness, paresthesia, blurred vision, dilated pupils, and increased tendon reflexes². Additionally, psilocybin has temporal effects on both systolic and diastolic blood pressure and on heart rate (approximately 10 bpm during the experience) ³. Blood pressure peaks after 30 minutes and stays that way for about 2,5 hours and then slowly returns to normal.

On a psychological level the most talked about risk is the ‘bad trip’, characterized by anxiety, fear/panic, dysphoria, and/or paranoia². Although this is a serious risk, even in unsupervised and uncontrolled conditions this is a rare event. Another risk is that of prolonged psychosis². It is thought that psychosis occurs in individual who had a premorbid risk for psychosis, but it is difficult to determine this causation. The last risk we like to address is that of hallucinogen persisting perception disorder (HPPD)⁴. This is a rare condition, often confused with ‘flashbacks’, which seem more benign. HPPD can be a debilitating condition. As the ‘bad trip’ occurrence seems much less likely in a safe, controlled environment. Not much is known about why or how it happens.

Although the above might sound a bit ‘heavy’, the use of psilocybin, especially in a good ‘set’ and ‘setting’ is considered safe. Recent research, combined in a review by Dos Santos et al⁵, shows that besides a profound experience, a psychedelic experience can help reducing anxiety, depression and addiction. Also there is evidence that a psychedelic experience has a positive effect on personality, the trait Neuroticism decreased, while traits Extraversion, Conscientiousness (trend-level), and Openness all increased from baseline to the 3-month follow-up after psilocybin-facilitated therapy for treatment-resistant depression⁶

The working mechanism of psilocybin is through the serotonin 2A receptor subtype (5-HT2AR)¹. Unfortunately, most antidepressants also work (partly) through this receptor. We will explore what this means. 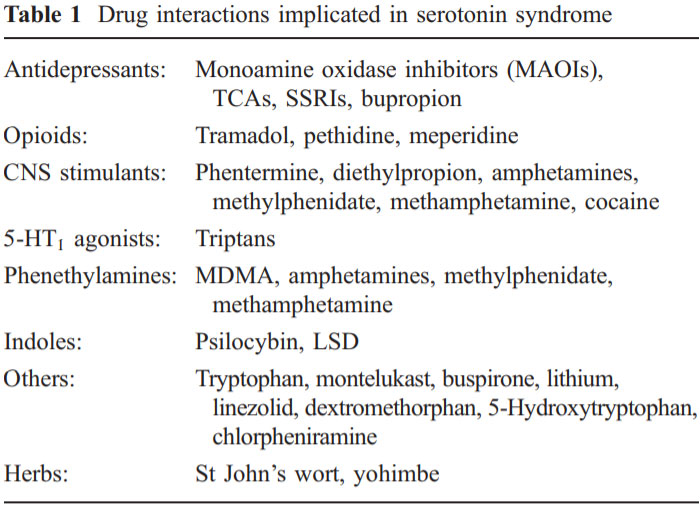 A first problem that might occur with substances that work through serotonin is ‘serotonin syndrome’, a possible life-threatening syndrome that occurs when there is too much serotonin in the body. As seen in table 1⁷, antidepressants are implicated, but also psilocybin and herbs like St. John’s wort. The symptoms of serotonin syndrome are listed in table 2⁷

Beside serotonin syndrome, there are other, perhaps more benign but undesirable effects of antidepressants and other medication. According to Johnson et al.² the alterations are problematic in scientific research and therefore user of these medications (and over-the-counter supplements and herbs) should be excluded from participation. Although this does not necessarily mean that the effects are harmful, care is advised.

Unfortunately, there is little and almost no recent research, but Johnson et al² summarized the findings:

For an optimal retreat it is thus advisable (if possible) to stop any of these substances before going on a retreat. It is highly recommended to do this under supervision of a professional (GP or psychiatrist)!

Besides the aforementioned antidepressants there are a lot of other types. Unfortunately, even less is known about these. Most of them do have serotonergic effects, so the same cautions are advised.

Serotonin-Norepinephrine Re-uptake Inhibitors (SNRI’s). The effects and side-effects are comparable to SSRI’s. Some SNRI’s are used for other purposes (ADHD, obesity, fibromyalgia, pain)

Lithium (carbonate) is a salt that is used mostly in bipolar depression.

Monoamine-oxidase inhibitors are an older class of antidepressants, especially the older variants. The had more side effects and a few where even dangerous in combination with tyramine containing foods (like some cheeses and sauerkraut).

Other classes of drugs, with possible interactions.